Please note that a lot or most of the main parts for a MkIII are the same, common to, as the Earlier DB2 & DB2/4s - Look on those parts pages if you cant find the parts you require on the MkIII pages.

The Aston Martin DB MkIII's were built from March 1957 to July 1959, from Chassis No's AM300/3/1300 to AM300/3/1850, they were the last of DB2 variant's & the last of what are considered to be 'Feltham' cars even though they & earlier cars were built at Farsley in West Yorkshire, Feltham being the Head office of Aston Martin then.

The bodies for the MkIII (and MkII) were made by Tickford's at Newport Pagnell which was to become the home of Aston Martin for the next 45 or so years, the Service Dept is still there (2012).

The car saw the 1st use on a true production car (not the Production run of the DB3S) of the famous Aston Martin grille shape since used on all subsequent Aston's, it also heralded the 1st use of the dashboard shape used up to & including the DB6 Mk2.

A single pipe exhaust system was fitted as STD, with Twin exhaust pipes being an option, offering a supposed 16bhp increase.

Alfin Drum brakes were fitted all round to the 1st 100 cars with Girling front disc brakes an option, they became STD after AM300/3/1400, to fit the disc brakes a small change in spec of the wire wheels was required.

Although there were 4 options of diff ratio fitted to the 4HA Salisbury axle, mainly 2 were actually used, 3.77:1 to most of the cars, with 4.1:1 often being fitted to Overdrive cars as it offered a faster 0 to 60 time.

Please download our Parts Enquiry Form, fill it in with your details, your cars details & the parts you require, save it with a surname & date related  name & email it back to us at sales@fourashesgarage.co.uk for a faster reply.

Remember our prices on these pages include VAT @ 20%, if you are a resident outside the EU this tax is not charged. 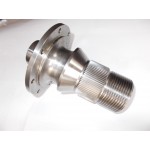