The water pump on a VB6 series engine fitted to a DB2,to 2/4 MkII, Lagonda 2.6 & 3ltr Models is in built into the front timing cover, it is driven by the intermediate sprocket shaft / spindle.

The water pump consists of very few parts, however failure or wrongly assembled water pumps can cause quite a few problems, the largest being water in the oil, often mistaken for head gasket failure.

On the carburettor side of the timing cover, just behind the ignition coil (if fitted) is a 3/16" / 4.76mm weep hole, this shouldn't be blocked, either by muck or by design as failure of the gland seal then causes the coolant to leak in to the engine past the oil seal as described above, if the water pump gland leaks the weep hole dribbles, fairly simple.

If the water pump flinger is missing it't not important, it's more important to have the impellor close (as close as 0.005" to 0.010") from the timing cover casting face, the gland seal spring should keep enough pressure on the thrust ring to keep the impellor at that distance but just check to see if the shaft has lots of end float before refitting the impellor, carried out with a clock gauge.

The causes of the gland seal failing are:

2, Gland seal failure it self, replace the gland seal & oil seal and put it back together

3, Impellor thrust ring failure, the face of the thrust ring where the gland seal contacts is replacable, a simple bearing press gets them off carefully, fit new thrust ring, gland seal  & oil seal

If the oil seal fails there will be oil coming from the weep hole, this can be caused by: 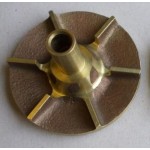