We manufacture completely New Lucas Style Reserve Valves for a great many Classics, consisting of 23 or 24 new individual parts.depending on spec + a new gasket are included.& 2 or 4 x brass fastening screws & sealing washers if required (extra charge for these)

Instruction leaflets for fitting are now provided with each reserve valve, whether new or recon because we had to repair one unit twice because of poor fitting, and have had a couple back under warranty when it was a user fault.

We have made quite a lot of special tooling including press tools to make these new valves up, all parts are now made new.

We now have a comprehensive booklet containing the tube measurements & bends if required of a great many cars.

Original Lucas Fuel Reserve valves are normally fairly reliable, the main problems being faulty solenoids which, on an early Aston, can burn out the wiring loom at best & set fire to the car at worst case,

Old bodies are often so badly corroded & damaged they can no longer be reconditioned,

Another problem is split tubes, these split & stop the fuel pumps sucking fuel once the split is uncovered by the lowered fuel level.

When we get the valves for reconditioning the worst cases are when the valves are partially stripped & damaged, because of this they cannot be reconditioned , we much prefer to have them complete, not stripped & undamaged, then tubes can be measured if we have no record of that valve, then new units ones can be assembled.

The advantages of our new valves are:

Our new CNC machined bodies are Anodised to help stop the onset of corrosion due to ethanol damage & varnish sticking the ball in its housing.

The tubes are new brass giving an expected life of 40 years +. sometimes we use copper if its very tricky to bend.

All parts (springs, etc.) are fairly resistant against modern fuels with ethanol in it.,

The normal fitting to the fuel pipe is a 1/4 bsp male union taking a 1/4 bsp female nut on the pipe, however for higher flowing applications like a DB4 GT we can offer a 3/8 bsp male union on the valve , we can also supply the 3/8 bsp female nut, solder nipple & 3/8" od copper pipe, or plastic pipes with nipples to suit.

All new valves are now double vacuum tested, otfen triple tested, once before assembly, the 2nd during assembly & 3rd after assembly before fitting the gauze, both of the latter are combined with electrical testing to ensure the valves work as intended, this will be carried out on our specially made test bench.

We can make up new valves to suit cars which didn't originally have a valve providing you have enough space & the tank can be modified. 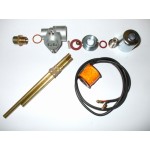 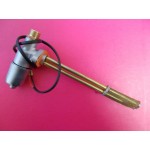 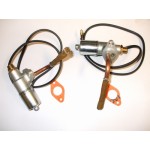 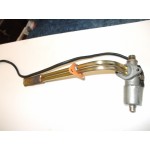 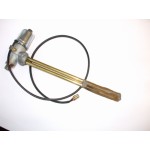 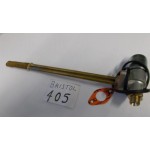