Why not get Chris Adams of Four Ashes to rebuild your engine or cylinder head, Chris has nearly 45 years experience of rebuilding Aston Martin engines for models produced between 1950 to 1982.

These can be for race, rally, fast road & Standard use.

Please read the article below to find out more. 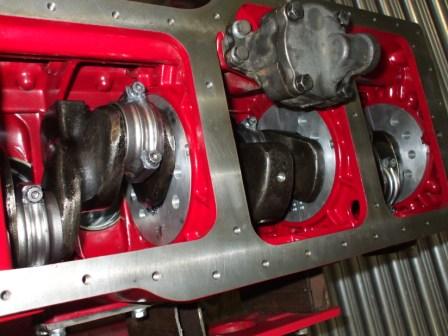 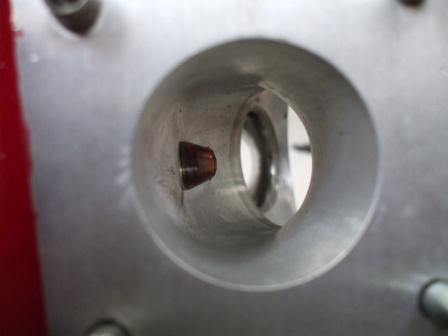 Why would you bring an engine to me ?

Four Ashes have been rebuilding the Aston Martin DB2 to MkIII engines for well over 50 years now, (DB4 to DBS 6 cylinder & DBS/ AM V8 engines for a little less, see bottom of page) The 1st being for Michael Moss's 1st DB2 registered RBW in the mid 60s, the engines early on were largely rebuilt to the Workshop manual, however as we learn't we adopted our own techniques, learning a lot over the years on how to build these engines correctly, this is still being refined today as we strive further for perfection.

Chris rebuilt his 1st Aston DB2 cylinder head at the age of 16, he was rebuilding engines at the age of 17 (long before he qualified as an engineer), he has built a great many race, road & std DB2, MkIII, DB4, DB5, DB6 & V8 engines, a 1.5ltr Aston engine a lot of times, a lot of proprietary 16 valve road & race engines of other marques, several A, B & C series Austin engines, a few Rover V8 engines, several Bentley & Rolls Royce engines, a Delage 8 cylinder head & is still learning & understanding engines in general, Aston engines in particular.

Our intention is to give you a trouble free, leakless engine (road or race) that doesn't burn much oil or use any water, & performs faultlessly for many years with regular specialist servicing.

Chris's latest Aston DB2 racing engines (post 2015) should be able to produce around 100bhp per ltr reliably (at present the best engine with least modifications produces 92.5 bhp per ltr with tame cams & 3 x 1.75" SU carbs on our own inlet manifold) , here is a little of the background of what makes that possible.

A large breakthrough in understanding Feltham VB series engine problems came around 1985 when Jack Moss, Bengt Morner & Rex Woodgate started on a design of larger capacity oil pumps for the VB6 series engines to cure oil pressure problems once & for all, Bengt having the patterns made & the 1st castings made, I think 3 pumps were made to test & one of those pumps was then fitted by Jack Moss to an engine on his racecar.

Bengt immediately went back to the drawing board & using a major motor manufacturers super computer found that the block's transverse oil galleries were too small, he also found that the angled hole where the pump mounts to the block covers half of the pump outlet, the gallery from the pump toward the timing cover was also to small, all this resulted in undue wear on the skew gears that drive the oil pump & distributor shaft because of back pressure, if the oil pressure is too high in an unmodified engine this aggravates the problem.

A memo was produced & most good Aston Martin specialists are now in possession of this detail, however some companies are still getting it wrong, (August 2015), we still get recently rebuilt engines that we have to rebuild again - properly !

Note: We have since found that the original sized oil pump is perfectly adequate if it in very good condition and the engine built properly, this being not actually the original low oil pressure / oil pump problem as the above text states.

If other rebuilders don't know how to do this mod, walk away & find someone who does. BTW the large capacity oil pumps are now sold under the R Woodgate Consultants banner, Jack having relinquished his share in the design due to lack of funds, Bengt only needed a pump for his own car. -- Watch our engine parts list though for further developments as we have the Original Bengt Morner drawings back along with Rebuild of Original Oil Pump drawings, again kindly carried out by Bengt for us !

The next thing was the arrival of brand new blocks for VB6 series 3ltr engines, in the early 90s, this was a vast improvement over the worn out or damaged blocks that we had been using, they have all of the later factory mods that were never actually to become a production item even though an internal memo was produced after experiments in the development / racing dept of AML. The 1st batch of MkIII blocks was produced in 2010 & we got to build the very 1st engine with a new block, in fact Jean's MkIII DHC original block was used as a model. the 1st 2.6ltr block was made in 2014 & we also got to build that engine.

We had already designed pistons in the early 80s in conjunction with Omega of Halesowen, they produced a good forged piston for the 3ltr & 2.6ltr engines, we (Four Ashes Garage Ltd) also paid Omega for the design work & dies to make them & have had several batches of pistons using them ever since, this is the piston that is sold by other companies EVEN though it is our design using our dies, Omega don't have any loyalty which is why we now have redesigned our race pistons and use another manufacturer to produce them !.

This got Chris thinking & although he has been rebuilding the engines since 1975 at the age of 17, he started checking every part of WO Bentley's / Lagonda's design against his own knowledge gathered since 1984 when he left Four Ashes for the 2nd time of building very modern 2 & 4 valve road, rally & race engines, he found many anomalies with the design & came up with his own assembly procedure, these entail a huge amount of modifications & procedures to sort out the basic design even down to pressure testing the oil galleries & pressure relief valve at the start of the build then moving the sump plug boss as AML made the DB2 & DB2/4 sump so that you couldn't drain the last one pint of oil where they (AML) had the sump plug as original (they moved it on the DB2/4 MkII VB6 series engines), then we weld a tag so that the sump plug can be lockwired at nearly the end of the build

The actual build process after preparation starts with some coats of 2 pack paint specially mixed for us in the correct shade of Red on the bare block & finishes with a dyno test to run the engine in, set it up & check for oil leaks, after this a post- dyno check is carried out. Many engines have been assembled since then with one of the most powerful DB2 engines ever built at that time being fitted to one of the fastest racing DB2s ever built (rebuilt in 2005), the car then raced in the Spa Six Hour race in September 2005, this engine carried on for Six full racing seasons (until the end of 2010) including the Spa Six Hour race in 2008, with the head only being removed twice, the max working rpm of this engine being 7000 rpm with 8000 being seen once !

This engine didn't leak oil or consume much oil, it didn't leak / use coolant but did use plenty of fuel !

When stripped at the end of 2010, the engine was in very good condition, it could have been re-assembled with only piston rings & gaskets if it hadn't been for a large increase in HP being needed. This reliability has been achieved by absolute attention to detail, with every tolerance being checked & adjusted to its optimum, every engine we rebuild has this attention to detail.

Chris & his old team came up with many little tweaks to improve these engines, like making the top chain tensioner oil feed nut on a DBA engine the right size to fit the sealing washer properly, some engines seem to have this as original & some have a smaller nut which doesn't easliy seal against the rear top timing cover.

This attention to detail is also being put to good use when rebuilding DB4 to V8 (16 valve) engines.

When we repair engines we adopt the same principles of only doing the repair the right way, this is the best for our customers & ourselves, this applies to head rebuilds aswell.

We are certainly not the cheapest but one of the best at building engines, give us a try, you might be suprised !

In 2009 we loaned Flint / Vetus engineering Jean's DBA MkIII block & gave them some our unrivalled knowledge & hints when making the new DB MkIII block, in fact the way it was strengthened means that our Four Ashes designed pistons are some of the only ones that fit !

We put the same attention to detail into our Newport Pagnell engines as we do our Feltham engines.

All engines whether Feltham or Newport Pagnell have all tolerances recorded & a great many notes, they are dynomometer tested for running in & setting up purposes but it also give us a chance to rectify any small oil leaks or problems that may occur.

Disclaimer: Please note that we are Independent Aston Martin Specialists & have no connection with Aston Martin themselves other than selling their parts.