We pride ourselves on being able to undertake any work on your Classic Car. That certainly applies to bodywork . Amongst our illustrations are a few examples of the handy-work of our panel beater Phil, He learned his craft with Rolls-Royce and Bentley, he is just at home with Aston Martin cars, a real craftsman !

When it comes to bodywork there is little we cannot do!!

Sadly our ace painter Terry has left us & moved on, Good luck Terry.

We now have 2 even better painters, one of which worked for us some years ago, he works for a local company that now carries out all of our paintwork - bodywork is still carried out by Phil in-house.

For DB2 to MkIII we have the full bracketry for the Celette jig & the AML drawing's to repair the chassis frame including having the chassis box section's made in Imperial sizes.

We can make the complete bonnet assembly for DB2's through to MkIII's, as we have bonnet bucks for the complete range of Feltham cars.

We make the front valance from the edge of the Grille down, this can now be supplied separately for restoration of existing bonnets, and is again made on a proper buck.

A 'well known to AMOC' owners family DB2 for body off restoration to either original spec or original owners spec.

a DB2/4 that had a rear end accident 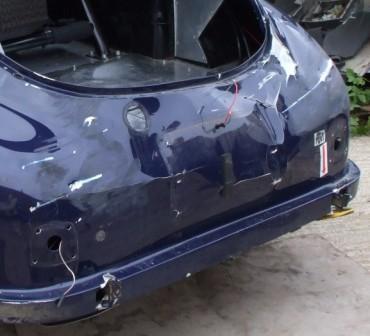 After a 4 days work inc stripping the paint

A DB4 GT that we have rebuilt fully mechanically, this car has had to have a repaint of sorts by Terry as we were left with the un-enviable position of 4 shades of Silver, so Terry did the best he could without incurring too big a bill.

Now we are hoping to repaint this car as it should be - a full bare metal respray in 2013 with a new front end from the screen forward.

A DB6 full rebuild, Two DB MkIII Saloons & two DB 2/4 MkI Saloon's that haven't been on the road for some years.

One of the MkI's has had the bodywork repaired after another workshop wrecked it & is now in the new owner Jim Campbell's hands, he has used it for tours, sprints, hillclimbs & circuit races. It has already had a fair amount of success with a class win (Harewood April 2010) 1st time out, a class win in its 2nd race (Silverstone MG weekend May 2010), + many other success's over the past 2 years inc the winning Team in the FISCAR race, Bentley Drivers Club Silverstone, 11th August 2012, Castle Combe in October 2012.

The other MkI also had the body attacked by another well known bodyshop, this was fully rectified & rebuilt as new, the body was then fully repainted in Almond Green & the headlining replaced by us, a new wiring loom & dash was then fitted, the car is being finally finished by the owner ready for late 20/12.

One of the MK111 Saloons used to belong to a long standing AMOC member & has changed hands twice since then, the bodywork & paint is finished (April 2010), the car is now being reassembled with re-chromed brightwork, headlining replaced, wiring loom replaced, dash rebuilt, repainted & instruments rebuilt with engine & transmission rebuilt & Lagonda rack fitted ready for a months testing & then shipment to Australia with final trim work there.

An MK111 DHC that belonged to a local businessman that has owned the car for 30+ years and in 2006/8, has had new sills, new alloy wheel arches, door skins, front pod skins, 1/2 a new bonnet, the car now finished with rebuilt front & rear suspension, the cylinder head has been rebuilt, the car is now used on a daily basis.

A Classic Car has to look the part.

Many thanks to you and Terry for doing such a terrific paint job on the Morgan Plus 4. When I decided to give you the work I did so in the expectation that you would achieve a first class finish and this has definitely proved to be the case. I was particularly impressed by Terry's attention to detail and the way he reassembled everything meticulously. The car probably has a better paint finish now than when it left the factory in 1965.

I was also pleased that the job came in on budget.

We have recently cleaned up the engine bay on another MK111 DHC, while Phil has replaced the sills & rear arches.The car has then been repainted. This car belongs to a businessman who just wants to drive his new beloved posession but required the car to be a tad smarter, this has now been sold at Bonhams AML auction in 2011.

A concours competing MK111 Saloon has had its engine & suspension removed by the workshop & Terry repainted the underside of bonnet, bulkhead, side pod inners, engine & chassis legs, the car was reassembled in the workshop & has gone on to win many concours class awards.

Nick Stephens took 1st in class in his AM V8 at Blenheim Palace on Sunday 14th May 2006 in the Pride of Ownership Class , Terry repainted this car (photo shows Terry working on his car). We have also rebuilt the engine since Nick bought the car some years ago.

Please note that we are Independent Aston Martin Specialists & have no connection with Aston Martin themselves other than selling their parts.